On Monday, June 16th, 2018 we were live at Quintet 2. This is a team survival grappling competition that was started by Kazushi Sakuraba and Josh Barnett. This has been one of the most talked about grappling events of the year. With their new rule set and the exciting teams they are building for competition this is one promotion that will go on to be very successful.

For fans that like to see a clear division between Pro Wrestling and Martial Arts Competition, this is the promotion you have been looking for. The teams are built up from certain Dojos as in the Case of the 10th Planet Team and some pieced together with good fighters like Team Reebok. This is very interesting because that opens up the competition to anyone that is starting to catch the public eye with their amazing skills on the mat.

Eddie Bravo had his arm in a sling due to a recent shoulder surgery to re-attach his bicep to his upper arm. It was loose due to a tear across the muscle. Ishi came in looking like a tank.

Team Vagabond was a team that was made up of all international talent. They had fighters from South America, Asia, and Europe. A full team of killers that were ready for anything on the mats.

The second round started off with PJ Barch from 10th Planet taking on Krzysiek Suchorabski. This was a very technical match from the start. Both fighters were very evenly matched, which showed their coaches and captains were on the ball in picking their line ups. There were several good exchanges between both fighters but ultimately this ended in a draw. A draw in Quintet means that both fighters are eliminated from the competition.

Next up was Richie “Boogeyman” Martinez vs Joao Assis. This was a power house battle to say the least. Both men are killers in their own right. This was the kind of match that legends are made from. The skill level and the moves seen in this fight are off the charts. However this fight also ended in a draw. Leaving the team’s scores at Zero to Zero.

The next match was the other Martinez brother, Geo Martinez vs Satoshi Ishi. The size difference between these two men was visibly obvious. Ishi, who is a Gold Medalist in Olympic Judo, quickly got the top position and was easily able to slam Martinez several times. Ishi continued to use top pressure throughout the entire match. Martinez was using his guard game to keep Ishi tied up. This match ended in a draw as well.

The next match was not a draw. In fact it only lasted :56 seconds. It was a match with Amir Allam Vs. Andrei Kazusionak. At one point Amir Allam was the heaviest member of the 10th Planet Team. This time he slimmed down so the team could make the Quintet team weight goal. But that is not to say he is a small man. In fact he is a big guy that moves like a 70 Kg fighter. He is very light on his feet. His opponent Andrei Kazusionak was also a mountain of a man. He was super aggressive in the match and was looking to land a Sambo Style leg lock. Amir moved quickly and tried to position himself to take Kazusionak’s back. At one point Kazusionak was able to grab Amir in a vicious knee bar that ended the match! This put Team Vagabonds on the board with 1 win.

After suffering the first lost on the second round, 10th Planet Team was under pressure to get a point on the board. Their next fighter was their heavy weight guy who also moves like a feather weight, Adam “Red Destroyer” Sachnoff.

Sachnoff was going up against Tiger Muay Thai’s Andrei Kazusionak who had just defeated his teammate Amir Allam. The Red Destroyer was out for revenge on the mats. This fight lasted 3m24sec. At the end Sachnoff was able to secure Kazusionak’s back and sunk in the winning Rear Naked Choke to get the tap.

This win by the 10th Planet team put the team scores to 1 to 1. Sachnoff’s next opponent was  Mikheil Dopidze. Since Sachnoff had a 20 KG weight advantage in the match the rules of Quintet require the time for the fight to be halved to 4 minutes. The two fighters fought this fight to another draw. After this bout the decision was given to the judges. The judges ruled that 10th Planet would face Team Reebok in the Quintet 2 Finals.

The finals came after a 20 minute intermission. Team Reebok vs Team 10th Planet was ready to go down in to the history books, and it was a crowd pleaser for sure.

The first match in the final was Daisuke Nakamura vs PJ Barch. This was a highly technical match with excellent grappling. This match was fought to a draw and eliminated both fighters.

Next up was a match that everyone wanted to see. It was Kazushi Sakuraba Vs. Richie “Boogeyman” Martinez. This match was well fought. Sakuraba went to try to pass Martinez’s guard several times but finally was caught and submitted, giving 10th Planet their first win in the final.

Richie Martinez having survived the first match of the final went on to face the star of the first round, Haisam Rida. This was a match that had everyone sitting on the edge of their seat. In the first round Rida cleaned house making short change of three opponents in a row. He was clearly the stand-out in that team for the first round. This time he started to see some equal push back from Martinez. After a few wonderful exchanges, Rida nails Martinez with an armbar for the win.

This built the tension in the arena because both of the teams vying for the championship medals are now tied at 1 to 1 . This meant that the next few matches would decide the entire tournament. Next up Haisam Rida would take on the other Martinez brother, Geo Martinez. Once again the size difference in these two fighters was visibly obvious. It seems that 10th Planet was sending out Geo Martinez as their giant killer!

This match did not start out slow and measured as the others had. Geo Martinez immediately leaps in an attack trying to get Rida in a front choke also know and a guillotine choke. Rida pushed him off and the two fighters started exchanging moves. Rida was trying to playing the top game but Martinez was getting around him and kept standing back up. Suddenly Martinez jumps back on Rida’s neck and successfully gets the tap from a front choke and revenges his brother.

This was the final score for the final round. Geo Martinez went on to face Hideo Tokoro and they eventually ended up in a draw after a very high level technical match.

After that Amir Allam, who was seriously injured in the second round made his return to take on the last fighter on Team Reebok, Dong Sik Yoon. This match was also fought to a draw, leaving the score 1-2 in favor of the 10th Planet Team. 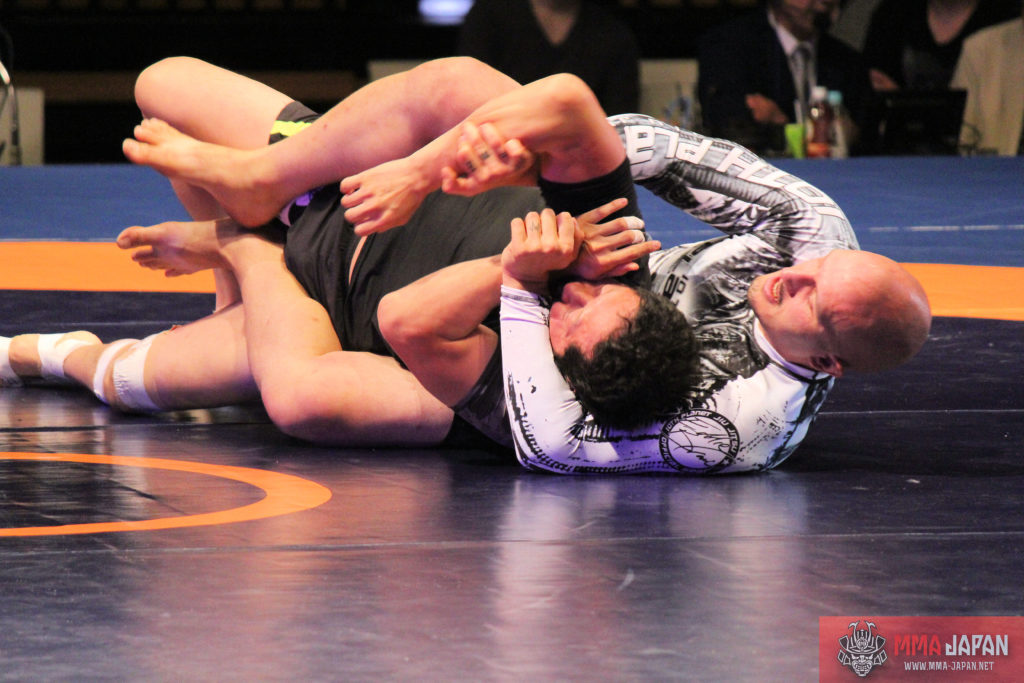 The final ceremony of the event was Kazushi Sakuraba presenting the 10th Planet team with the Championship medals. This was one great event and was excellent to see live. If you missed this event you can catch all the action on re-play on UFC Fightpass.

If you like to hear more about Japan Martial Arts Events please follow MMA Japan (@mmajpn1) on Twitter and Facebook. You can also visit www.mma-japan.net  for the latest and the best news in JMMA.

Deep Jewels 24 Signals the Return of Rin Nakai to MMA