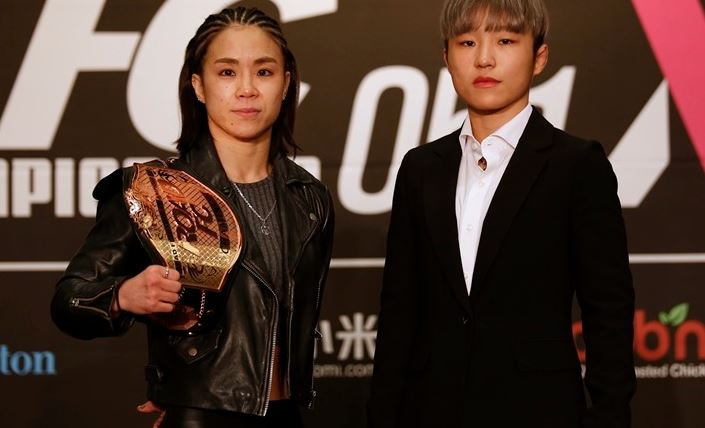 ROAD Fighting Championship announces the Official Results for ROAD FC 051 XX which took place on December 15, 2018 in Seoul, South Korea. In the ROAD FC Women’s Atomweight Championship, Ham Seo-Hee retained her title in her third defense with a Unanimous Decision over very strong challenger Park Jeong-Eun. ROAD FC Atomweight Championship Defending Champion Ham Seo-Hee and Park Jeong-Eun engaged in a very technical feeling out first round, tagging each other with punches. Ham got a takedown towards the end of the round and Park was able to pop up. In the second, Park started landing her punches, frustrating Ham, but the veteran kept her cool. Ham countered a huge throw and ended the round in mount pounding. In the third and final round, Park again showed moments of brilliance, but Ham was able to capitalize on her takedown attempts, land on top, and throw down punches. In defense, Park went for a wild knee bar and Ham lasted it out. The referee stood them up for the final minute of the round. Ham went in and cage wrestled for the close, keeping her title in a successful third defense. Ham Seo-Hee stated, “I want to thank my parents, my coach and teammates from Team Mad. I should have done better. I wanted a knock out or a submission but I didn’t get it. The next one, I will do better.” ROAD FC 051 XX At the beginning of their match, Lee Ye-Ji and Lee Su-Yeon swung for the fences, with Su-Yeon scoring a knockdown and Ye-Ji coming back with multiple takedowns. Ye-Ji worked submission attempts from the back and pounding from the mount. The second round was a thriller with knockdowns from both women, and Su-Yeon getting a huge upset by gaining mount and pounding, earning the split decision. Shi Ming kicked off the action with a flurry of punches to Shim Yu-Ri, then the two jockeyed for control along the cage. Shim’s knees in the clinch did a lot of damage and on the ground she had a guillotine from the bottom. In the second round, they traded punches then grappling. Shim’s knees came out in full force and she got the TKO. Kim Young-Ji threw hard punches at Rowan Pilger so she quickly went to her wrestling, but ended up on the bottom of a takedown. At the end of the round, Pilger was able to make her grappling work with a back take. The second round both repeated their game, then Hong got a yellow card for an illegal knee. Hong landed a takedown, but Pilger worked for submissions constantly and it won her the decision. To open up the main card, Baek Hyeon-Ju threw some nice punches, but Hong Yun-Ha went for the takedown and took control. From the back, Kim rained down the punches then sunk in a rear naked choke to make Baek tap fast. ROAD FC 051 Preliminary Card Results In the main event of the preliminary card, Michel Pereira got backed up by Choi Won-Jun’s big punches, but once he came off the cage, the Brazilian “Showman” found his range fast for an incredible KO in 41 seconds. Shin Seung-Min blitzed with a sweep and a knee, but Park Hyung-Geun came right back with a big lift and throw. Park kept up the momentum with a knockdown, wrestling and multiple takedowns throughout the first round. Shin blitzed the opening of round two as well, so Park went right back to his wrestling. Shin was able to land big punches that had Park wobbled at the end of the match, but Park earned the victory by Decision. Yeo Je-Woo came at Nandin-Erdene with a very surprising decision to strike, and he paid for it. Nandin-Erdene bided his time and then landed punches all over Yeo for the first round TKO, a terrific return to the win column for the Mongolian boxing champion. Jang Jung-Hyuk came in with confidence and big punches to negate a reach disadvantage against rangy Max Handanagic, who utilized his low kicks. Jang also scored with two takedowns in the first round. Handanagic found his distance in the second with loads of jabs and landed two takedowns of his own. It was close on all three scorecards and the decision was a Draw. Kim Tae-In took the fight right to Kim Ji-Hoon with big punches, but earned a yellow card for an eye poke. Ji-Hoon came back with a strong clinch and a near knock down, but Tae-In ended the first round strong with a takedown. Tae-In used his boxing to quickly end the fight in the second by TKO for a great debut. New Wave MMA ROAD FC is the stage where legends shine, rookies thrill, and epic battles are waged that determine the future of MMA. From the pageantry of the grand entrance to the final crunch of the KO, ROAD FC showcases the very best of Mixed Martial Arts sports and entertainment. As we say in Korea, “Fighting!” Event: ROAD Fighting Championship 051 XX Date: December 15, 2018 Venue: Grand Hilton Convention Center City: Seoul, South Korea ROAD FC 051 XX Official Results #5 ROAD FC Atomweight Championship Ham Seo-Hee def Park Jeong-Eun by Unanimous Decision #4 Atomweight Match Lee Su-Yeon def Lee Ye-Ji by Split Decision, 2:1 #3 Atomweight Match Shim Yu-Ri def Shi Ming by TKO, R2 4:08 #2 -60kg Catchweight Match Rowan Pilger def Kim Young-Ji by Unanimous Decision #1 Atomweight Match Hong Yun-Ha def Baek Hyeon-Ju by Submission, rear naked choke, R1 1:44 ROAD FC 051 Official Results #5 -86kg Catchweight Match Michel Pereira def Choi Won-Jun by KO, R1 0:41 #4 Featherweight Match Park Hyung-Geun def Shin Seung-Min by Decision #3 -72kg Catchweight Match Nandin-Erdene def Yeo Je-Woo by KO, R1 2:42 #2 Lightweight Match Jang Jung-Hyuk vs Max Handanagic is ruled a Draw, 1:1:D #1 Light Heavyweight Match Kim Tae-In def Kim Ji-Hoon by TKO, R2 0:50