Korakuen Hall, Tokyo
This was the 2nd Japanese Shooto event on UFC Fight Pass for 2017 & what a controversial night it was!! The action was red-hot but some of the judges’ decisions were borderline at the very least. Still, fans were on the edge of their seat all night as the combatants put on a show and a half!!  Without further adieu, allow me to sum up the results. I was joined in the commentary box by Enson Inoue & the irrepressible Mizuka Koike. 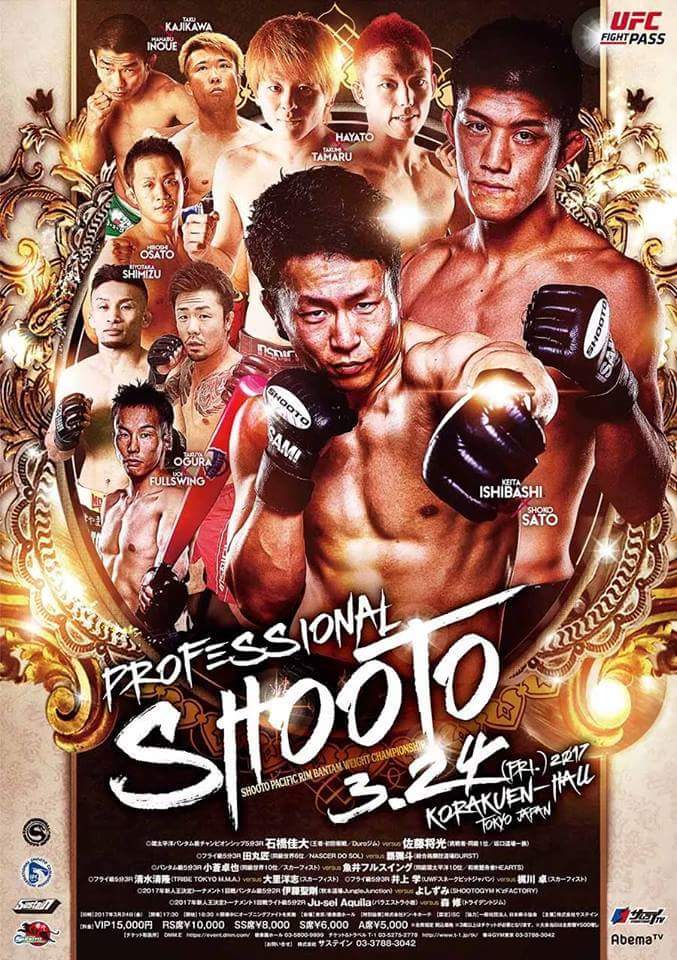 Ju-sei Aquila (ゆうせい・あきら) vs. Osamu Mori (森 修) 2 x 5 min rounds
When Mori disrobed, a 44 year old Adonis was revealed, muscle-bound & raring to go or so it seemed.  However, in the cage, fans were left disappointed as he didn’t offer much in terms of offense, seemingly content to last until the final bell. Instead, it was Aquila who was able to throw his opponent to the canvas on numerous occasions but was unable to capitalize as he appeared lost on the ground. Both fighters ran out of gas toward the end of the 1st round & were just going through the motions in the 2nd round, hardly able to lift their hands to make a punch. Deserved victory by unanimous decision for Aquila but he will have to improve his fitness levels, learning that training & match fitness are two different kettles of fish.
Seigo (伊藤聖剛) vs. Yoshizumi (よしずみ) 2 x 5 min rounds
After the 1st fight, fans were expecting more of the same as two fighters with little pro experience took the stage.  This was thrown out the window from the opening bell as both fighters dropped their guard & came out swinging.  Both fighters landed bombs at will but Seigo seemed to have the better of the exchanges, rocking Yoshizumi with a hard right & pinning his opponent against the fence for long periods. In the 2nd round, Yoshizumi turned it around, appearing to change strategy by attempting takedowns & maintaining dominant position on the ground for much of the round. So dominant was Yoshizumi that it appeared that he may have done enough to win the fight, but the judges saw it differently, a majority draw the result. 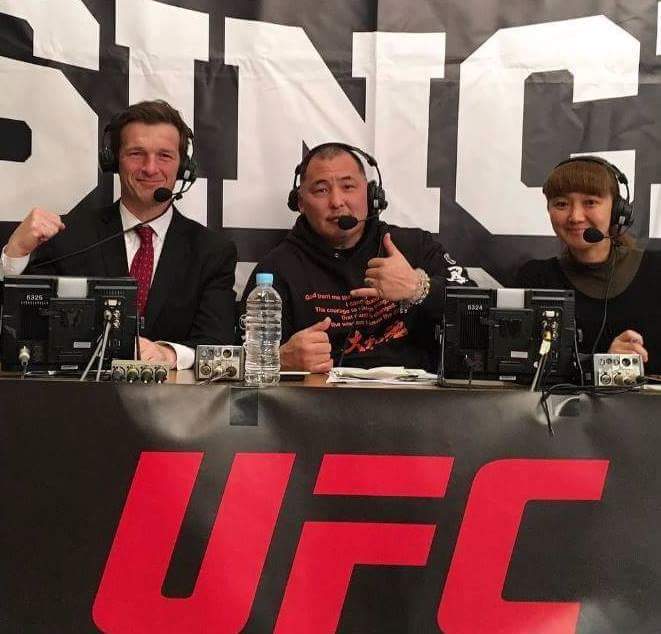 Taichi Taguchi (田口 泰地) vs Yuki Ueno (上野 勇貴) 2 x 5 min rounds
Taguchi was obviously proud of his accomplishments in the gym as he looked at his images on the big screen more than once & flexed his muscles in his pre-fight routine, but love him or hate him, there was no mistaking his prowess in the cage. His punches were crisp & Ueda had no answer for his power. When Ueda got tagged by a right, Taguchi jumped all over his foe on the ground & quickly secured a guillotine choke.  Easy 1st round win for Taguchi, which prompted more bodybuilder-type poses.
Taison Naito (内藤 太尊) vs Joji Mikami (三上 譲治) 2 x 5 min rounds
Naito was impressive in his loss to eventual division champion, Ryogo Takahashi, back in April last year & so expectations were high that he could get back into the winning circle. And he didn’t disappoint!! Out of the blue and with both fighters still feeling each other out, Naito delivered a mighty right hook that landed smack on the button, Mikami landing on the seat of his trunks. Mikami seemingly had his faculties in order as he covered up but the referee felt otherwise as he stepped in to end the fight. One punch KO by Naito to raise his stocks once again.
Manabu Inoue (井上 学) vs Taku Kajikawa (梶川 卓) 3 x 5 min rounds
With Inoue accumulating 14 decision wins from 17 & Kajiwara 6 from 6, the writing was on the wall, and the fight went according to script. Each round was a mirror of itself. Inoue was the aggressor as he made the initial takedown at the start of each round & the rest of the round saw Inoue attempting to lay his opponent prone on the canvas with Kajiwara valiantly defending it. At the end of each round, Inoue was able to gain the ascendancy but it was too late to secure a submission win, the bell bringing an end to the action. Inoue won by unanimous decision, mainly through dictating terms rather than landing anything of note.
Kiyotaka Shimzu (清水清隆)vs Hiroshi Osato (大里洋志) 3 x 5min rounds
With Osato racking up 9 decision wins from 9, another yawnfest was on the cards but Shimizu was a more rounded fighter and had a lot to prove to his fans after his January fight was cancelled due to his opponent not making weight. Once again, it came from nowhere as both fighters were still feeling each other out when a flash right from Shimizu stunned his opponent, Shimizu backing it up with a flurry of punches as Osato fell to the ground. Again, the referee may have been a trifle early in stepping in but a well-deserved victory nevertheless for Shimizu.
Hotaka Otsuka (大塚歩空) vs Hirokazu Takazawa (高澤浩和) 1 x 3min round
The kids were up next & it was good to see that Shooto is looking after its grass roots, these 12 yr olds having the experience of their lives. Otsuka was the dominant fighter and as they both fell to the ground, Otsuka continued his ascendancy, quickly securing a sleeper hold, forcing his opponent to tap out.
Takuya Ogura (小蒼卓也)vs Uoi Fullswing (魚井フルスイング) 3 x 5min rounds
With Fullswing as a ring name, it would be an injustice if he came out defensively. Those worries were alleviated straight away as 19 seconds into the fight, he delivered a roundhouse left hook that crumpled Ogura & the referee rightly jumped in as Ogura was left pondering what happened. Fullswing raises his record to 17-4 & if he continues, a title fight might not be that far around the corner.
Hayato (覇彌斗)vs Takumi Tamaru (田丸 匠) 3 x 5min rounds
With outstanding victories over two seasoned veterans in his last two fights, Tamaru could have expected a potential title shot so when Hayato sounded him out after his own victory, Tamaru begrudgingly stepped into the cage, one step further away from that dream. This could have added fuel to the fire as Tamaru was aggressive from the outset. Hayato was able to offset this at times with some clean takedowns but couldn’t push home the advantage as Tamaru was able to escape. Tamaru was able to take back position halfway through the 1st  round & battered Hayato, seemingly on his way to victory, scoring a 10-8 on one judge’s card. However, Hayato then started to clamber back into the fight. Once again, he was able to takedown Tamaru at will but this time he held his position and towards the end of the round, Tamaru appeared to be in trouble but he held out for the bell. Which set up an intriguing last round: the winner of that round likely to win the fight. In the first half of the round, Tamaru was dominant & opened a cut over Hayato’s eye with some well-placed elbows. Hayato wouldn’t lie down though and an excellent move saw him take control for the rest of the round, Tamaru noticeably tiring. In the end, it was left to the judges & they couldn’t split them so both combatants maintained their unbeaten records & it was a bit of an anti-climax, although there was no doubting the action. Great fight, full of excitement. Tamaru will have to work on his takedown defence & stamina, but he will be a better fighter for it. Hayato could potentially improve his standing game but then again, his preference seems to be on the ground.
Keita Ishibashi (石橋佳大) vs Shoko Sato (佐藤将光) 3 x 5 min rounds
And so the stage was set for this tantalizing contest between two of the hottest Japanese shooto fighters at present. Ishibashi quickly realized that he wasn’t going to win standing toe-to-toe with Sato as he made numerous takedown attempts but Sato showed great poise and balance, withstanding the pressure on the whole. Ishibashi made a desperate attempt at a leg bar and the longer it went on, the more the crowd thought Sato might have been in trouble but Sato seemed unfazed & was able to fight through it. 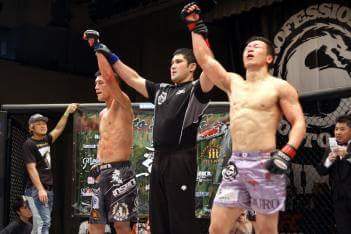 The second round was clearly Sato’s round as he peppered Ishibashi with a mix of punches and well-placed elbows. A less experienced referee might have jumped in at one point but this is Ishibashi’s game. He absorbs considerable punishment before latching onto an opponent’s mistake & submitting them before they know it. However, Sato was aware of Ishibashi’s game & he didn’t afford him those opportunities. Grounding & pounding at will, correcting his position to avoid risks & opening a cut that required the doctor to take a look at one stage. The round was so lopsided that it could have possibly drawn a 10-8 from one or more of the judges (all 3 judging it 10-9 eventually). Which left the champ needing to win the last round to avoid defeat. He came out flailing but not really landing anything of note, Sato easily able to slip to the side. Ishibashi was able to secure a takedown & maintained position but Sato also appeared to have won that exchange, landing elbows & punches from below. Ishibashi continued to press, throwing haymakers that mainly missed their target. Ishibashi’s aggression won him the round on 2 of the judge’s scorecards, saving him from the brink of defeat & hence successfully defending his title by way of a majority draw. Sato could justifiably be upset at the result as he seemingly did enough to take the title away but it wasn’t to be. Controversy right to the end which provoked a sense of “wow” on many an observer.
But hey, what a great card!! So much action & KOs a plenty. The action only gets better with Yutaka Saito set to defend his Shooto World Featherweight title against living legend Caol Uno at Professional Shooto 4.23 at the Maihama Ampitheater. Can’t wait to bring you all the action once again and remember, if you can’t make it down to the Ampitheater, you can catch it live on UFC Fight Pass!!