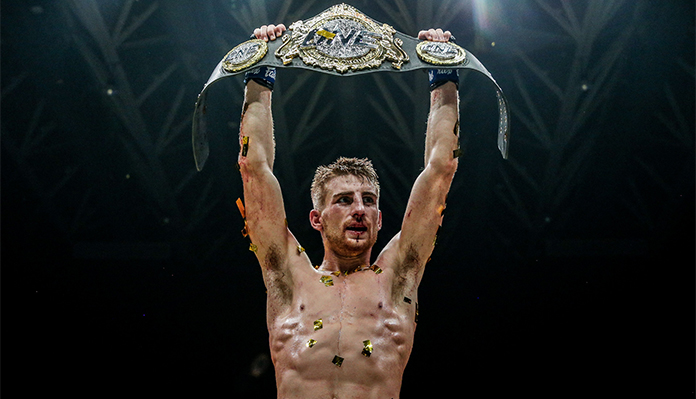 Expect a lot of knockout finishes when ONE Championship returns to the Philippines for ONE: DAWN OF HEROES on 2 August.

Newly crowned ONE Flyweight Muay Thai World Champion Jonathan Haggerty will make the first defense of his title against Rodtang Jitmuangnon. Haggerty, who shocked the martial arts world when he dethroned Muay Thai legend Sam-A Gaiyanghadao at ONE: FOR HONOR in Jakarta, Indonesia in May, is wasting no time getting back into the ring and defending his title.

Both he and Rodtang are obviously formidable strikers — a prerequisite for Muay Thai brilliance. However, both men are so tough, we might not see a finish in the main event. Haggerty took the best of what Sam-A had to offer when the two met in Jakarta, while Rodtang has shown similar resolve in his career leading up to this point, so fans may be in for another war. Aside from Haggerty and Rodtang, the stacked card in Manila may also feature a few more elite-level strikers who might be hunting for a KO finish.

Eduard Folayang may have lost his ONE Lightweight World Title to Shinya Aoki on 31 March in Tokyo, Japan at ONE: A NEW ERA and will turn 36 in November but don’t underestimate his ability to strike on an elite level. Folayang is still a dangerous man on the feet. When he won his first world title with ONE in November 2016 at ONE: DEFENDING HONOR, he did it by stopping Aoki with strikes.

When Folayang locks horns with Eddie Alvarez in Manila, the American had best be prepared for some powerful strikes coming back at him. Folayang may be desperate to maintain relevancy and avoid a late-career losing streak. His hands, feet, elbows, and knees will be as lively as ever.

Like his opponent, Alvarez is coming off a first-round stoppage loss in Japan. What’s worse for Alvarez is that the defeat came in shocking fashion as almost no one gave Timofey Nastyuhkin a chance to defeat him, let alone score a KO victory. Many thought the loss would crumble Alvarez and perhaps push him to retire, but that isn’t the case. Alvarez isn’t just coming back, he seems as defiant and determined as ever. He recently posted the following message on his Instagram account.

“Ohh you thought a loss would discourage me ?? You see I am from a place where losing and failure was a common practice. My chances were very small to ever be called a winner. I learned to lose, fail, be told no and was rejected way before I ever understood how to win. You didn’t kill a King, You pissed off an empire. I’ll see You all Aug 2nd in Manila.”

In Alvarez’s career, he has scored 17 of his 29 wins by KO or TKO. In his long run as a mixed martial artist, Alvarez has knocked out the likes of Justin Gaethje, Rafael dos Anjos, Patricky Freire, Aoki, and Roger Huerta. Alvarez must beware of Folayang’s power, but it goes both ways. That’s why this is such an intriguing battle.

You won’t find a martial artist with a KO ratio much better than Yuya Wakamatsu. The Little Piranha has 10 wins as a pro, nine of them coming by KO or TKO. Wakamatsu is on a two-bout losing streak, however, with his most recent defeat coming at the hands of Demetrious “Mighty Mouse” Johnson in Tokyo at ONE: A NEW ERA. While the defeat eliminated Wakamatsu from the ONE Flyweight World Grand Prix, it also showed his power and promise.

He landed a hard right hand against one of the greatest mixed martial artists of all time and left a noticeable welt under Johnson’s eye. The punch got Johnson’s attention and pushed him into a strong performance to get the win. In Manila, Wakamatsu clashes with Geje Eustaquio who should do his best to bite down on his mouthpiece.

When most think of Johnson, his striking power isn’t usually the first thing that comes to mind. He has exceptional quickness, wrestling and submission abilities. His strength is underrated, and he’s tough and smart. However, he can also pack a wallop with his strikes. In the past, Johnson stopped perennial title contender Joseph Benavidez with one punch and destroyed two-division champion Henry Cejudo with strikes.

Johnson takes on Tatsumitsu Wada in the semifinals of the ONE Flyweight World Grand Prix. Wada shouldn’t forget about Mighty Mouse’s stand-up game.