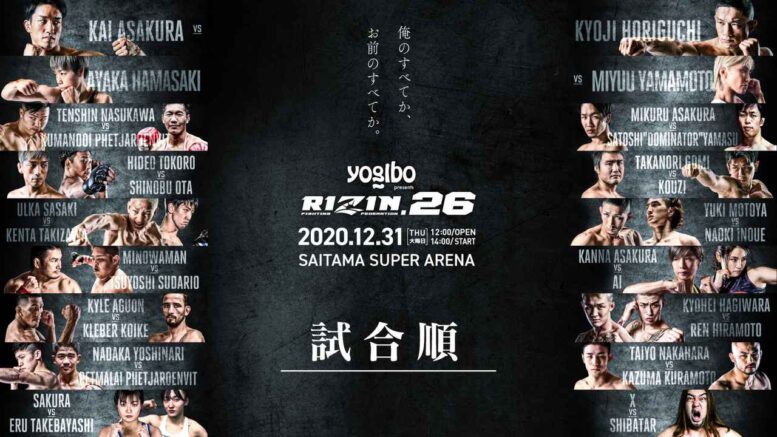 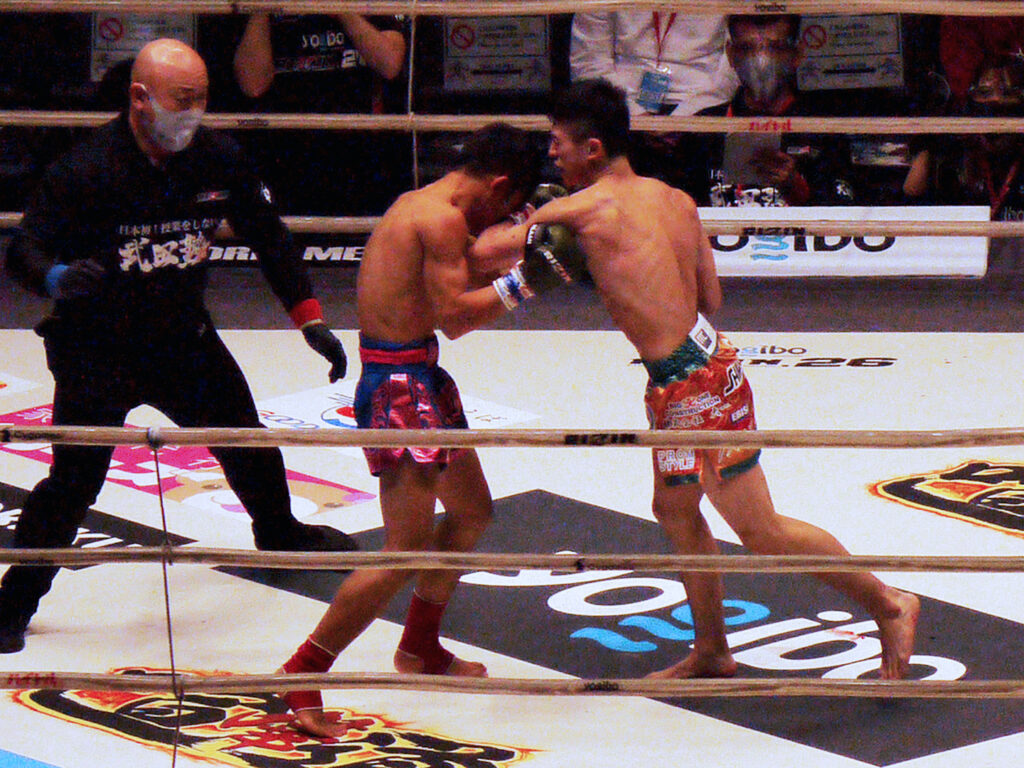 Not a household name but one of the most complete strikers in the world, Nadaka utilizes a wide range of techniques with virtually perfect application. Wasting little time the Japanese striking sensation blasted Phetjaroenvit with a barrage of kicks, knees and punches. It was the signature elbows from the Japanese phenom that scored the first 2 knockdowns. Sequencing a lead uppercut, knee then elbow for the down, Nadaka weaves together high level combinations rarely seen. Phetjaroenvit gave his all, launching loaded kicks and knees but could not match his adversary. The end came courtesy of a body knee, left, right combination that flattened the high ranked Thai for an incredible 1st round victory. Overshadowed by Kickboxers like Tenshin Nasukawa and Takeru, Nadaka is a potential superstar in the making. 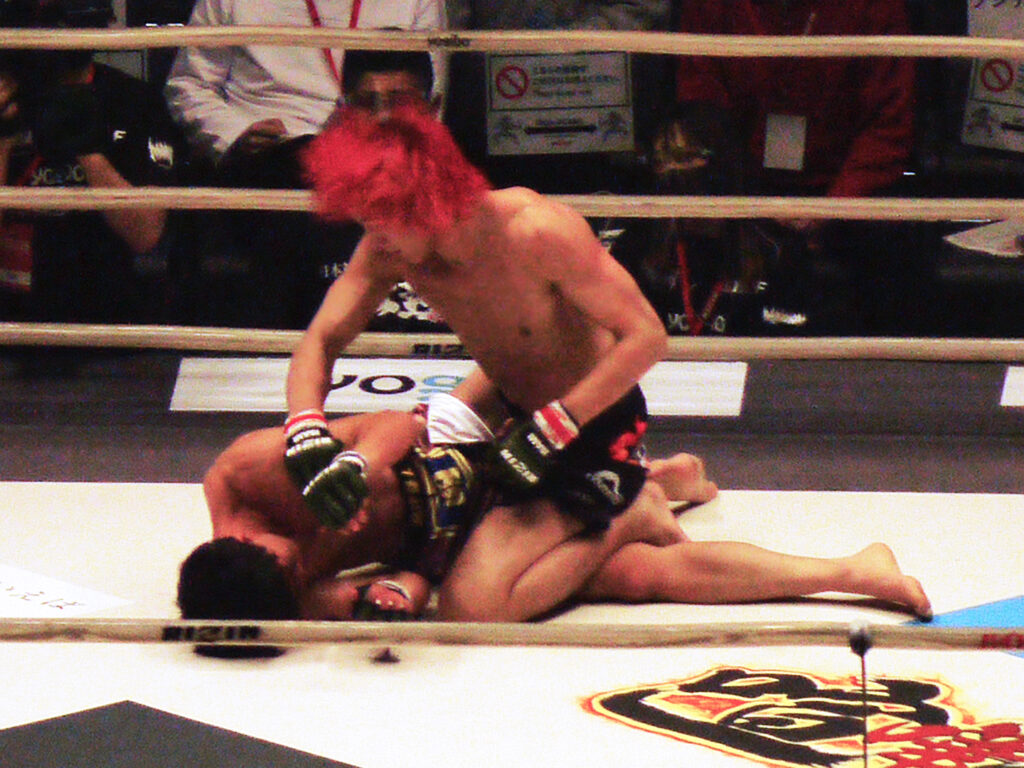 Southpaw Ulka controlled the real estate with lead hooks and high left kicks as Takizawa searched for power shots. An instinctive and well executed Uchi Mata throw from the Karate stylist landed Sasaki on his back. Worked his elite ground game, Sasaki soon isolated an arm, set up an omoplata, then hooked a foot for a sweep reversal. While Takizawa managed to kick the grappling specialist off to get to his feet he soon found himself back on the canvas again. Sasaki finished very strong, putting his bodyweight into every punch and elbow.

Takizaiwa sensed the urgency in the 2nd, upping his output he defended shots and takedown attempts and found a home for his fists and knees. Swinging for the fences the Reversal Gym Tokyo standout briefly stunned Sasaki with short hooks and a jumping knee. Sasaki answered, racking up jabs, left hands and knees to the body. After a good start things started to go downhill for the deadly striker as Sasaki once again took the fight into his realm. Maintaining masterful bodylock control from the back Sasaki controlled yet could not find the opening for a submission. Takizawa held tough, defended and escaped to end the round on top.

In the 3rd round both fighters were showing signs of fatigue after setting a furious pace. The reach of Sasaki remained the crucial factor as he peppered continuously with jabs. Low calf kicks from Takizawa backed up by a solid uppercut and knee had submission artist change gears for the takedown. From the bottom the striker shocked Sasaki by locking up a tight ninja choke that would have finished a lesser grappler. The Longo And Weidman MMA representative remained calm and worked out the hold then proceeded to dominate the remainder of the round on top. Returning to the ring 14 months after having his jaw shattered by Kai Asakura, a bigger, more muscled Sasaki picked up a hard fought unanimous decision victory. 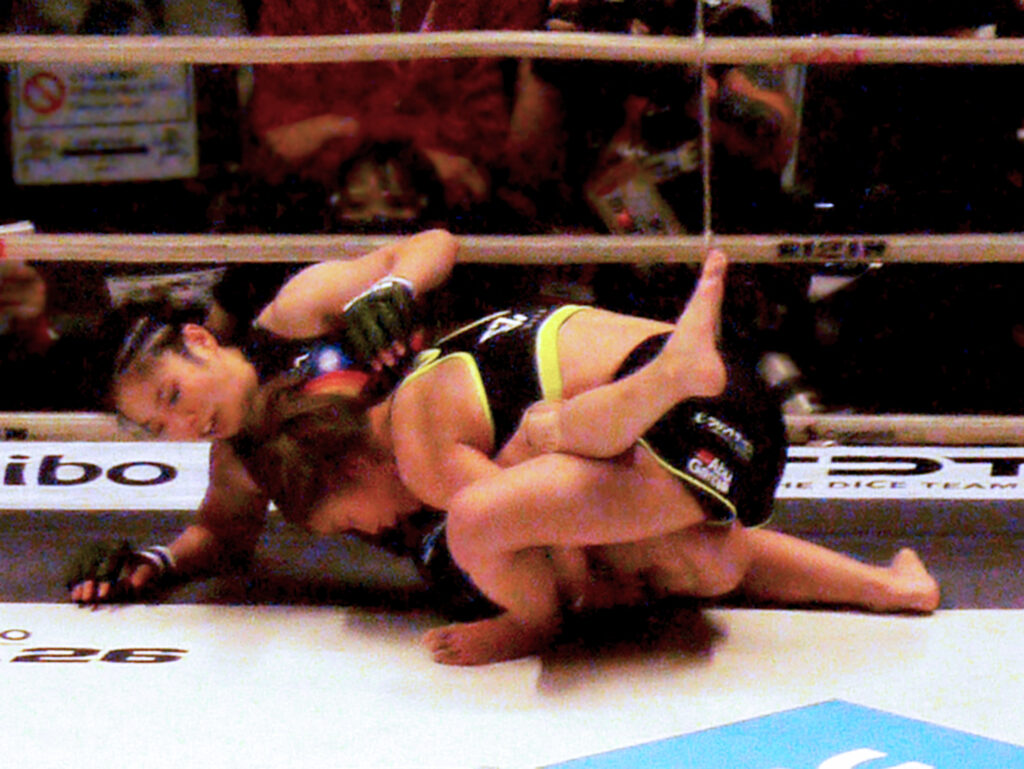 As both southpaws squared off, Asakura found a home for left body kicks early. The more polished striker, she pressured “Princess Bee” into shooting or striking then countered effectively. Shimizu resorted to telegraphed shots that the former champion had little trouble shutting down. With lefts and rights finding their mark Asakura was a step ahead.

As Round 2 commenced and it was clear the Gen Sports Academy Wrestler was struggling to fight her fight against her more versatile adversary. Shimizu was game though, securing a front headlock she powered Asakura down only to be caught by a masterful reversal. Shimizu’s wrestling was also top notch and she immediately returned to her feet. A brief a takedown and control time against ropes gave “Princess Bee” a much better round, however she struggled to capitalize. On the feet the striking of Asakura shone through , hitting angles and using footwork she tagged her opponent and avoided the counters.

In the final stanza the Paraestra Matsudo representative appeared to have Shimizu’s number. Just as everything was going Asakura’s way though she was caught by a surprise takedown. Once Asakura fought her way back to her feet they both traded blows. Shimizu was gritty and determined and was not without success, with innate power she did damage every time she landed. The accurate, crisp strikes came from Asakura though and the volume set the 2 apart. A late double leg from Asakura capped off a solid performance that justified the unanimous decision win. 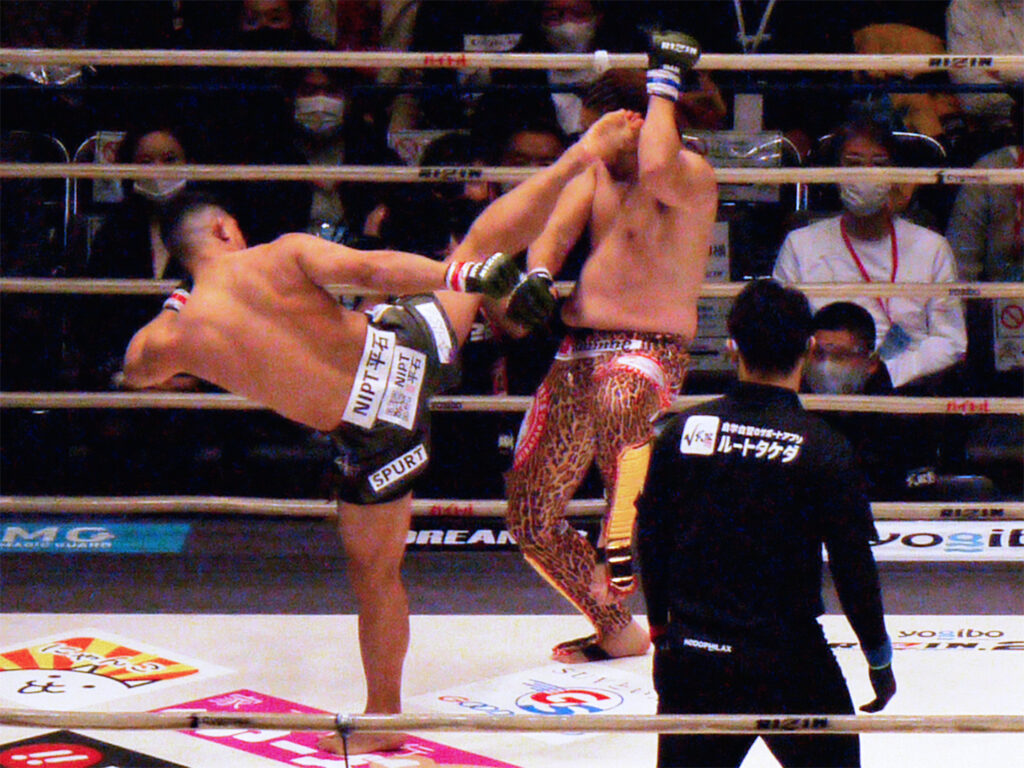 Atsushi “Shibatar” Saito made his MMA debut almost 10 years ago where he put his entertaining pro wrestling style on display. Building a name for himself on social media,”Shibatar” now boasts 1.13 million subscribers on his Youtube channel alone. His opponent “Mr X” turned out to be no other than renowned Kickboxer Hiroya Kawabe. A mixed rules bout was announced for the match, 1 round of kickboxing followed by 1 round of MMA, both 3 minutes. If the bout when the distance it would be deemed an automatic draw.

The match was destined to be entertaining but exceeded expectations. “Shibatar” played the fool early, bouncing off ropes, feigning being hurt, doing the “Ali Shuffle” and calling the hard hitting Kickboxer on. Kawabe punished the legs early with thudding leg kicks. When “Shibatar” planted his feet and recklessly traded, it was surprisingly competitive, as he took the brunt of Hiroya’s crushing right hooks and returned fire. Neither shied away from throwing down but it was the Kickboxer who was in the drivers seat with his precise power-shots pulling ahead. In the dying seconds of the round the Pro Wrestling Youtube sensation scored a shocking knockdown in a blow for blow shootout.

The highly anticipated MMA round was next. “Shibatar” pulled guard in order to lock up a quick armbar. When it seemed the writing was on the wall for the kickboxer, Hiroya dug deep and rolled out. Returning to the feet the more technical striker Hiroya took over late as “Shibatar” absorbed some massive hammers. A right hook, left body, right head kick had Saito out on his feet as the round, and fight, came to a close. The thrilling contest was declared a draw only to be later overturned. A review of the 2nd round armbar showed an apparent tap from the Kickboxer, as a result the fight was changed to an armbar win for Saito. 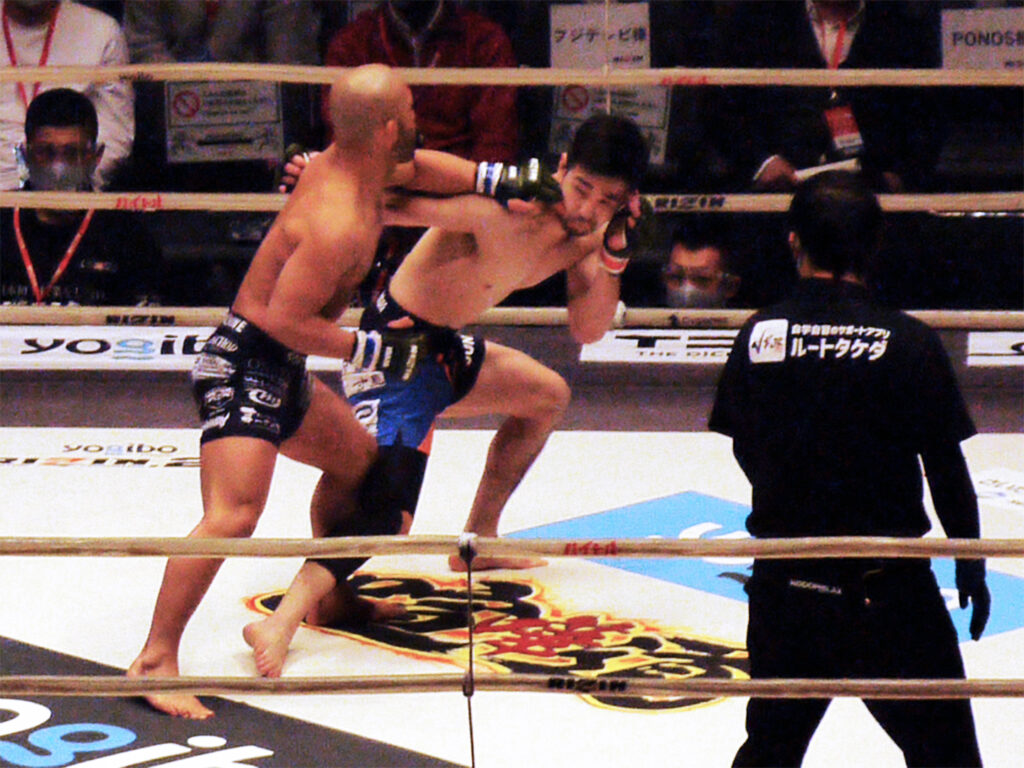 Greco Roman national champion Kuramoto showed no respect for the striking of Nakahara. Storming in to close the distance on the rangy veteran, Kuramoto winged loaded left and rights. Employing his reach, Nakahara threw hook kicks, long 1-2s as he tried to maintain distance. On the inside, the wrestling powerhouse blasted a right hand, right knee combination to the head and “The Sun” went down. Nakahara used his experience to try to escape from some brutal ground and pound. As he rolled and shifted position however, he fell right in line for soccer kicks. 3 solid kicks to the head from the MMA wrestler and the fight was over. Another impressive stoppage solidifies Kuramoto’s position as one of Japans most dangerous fighters. 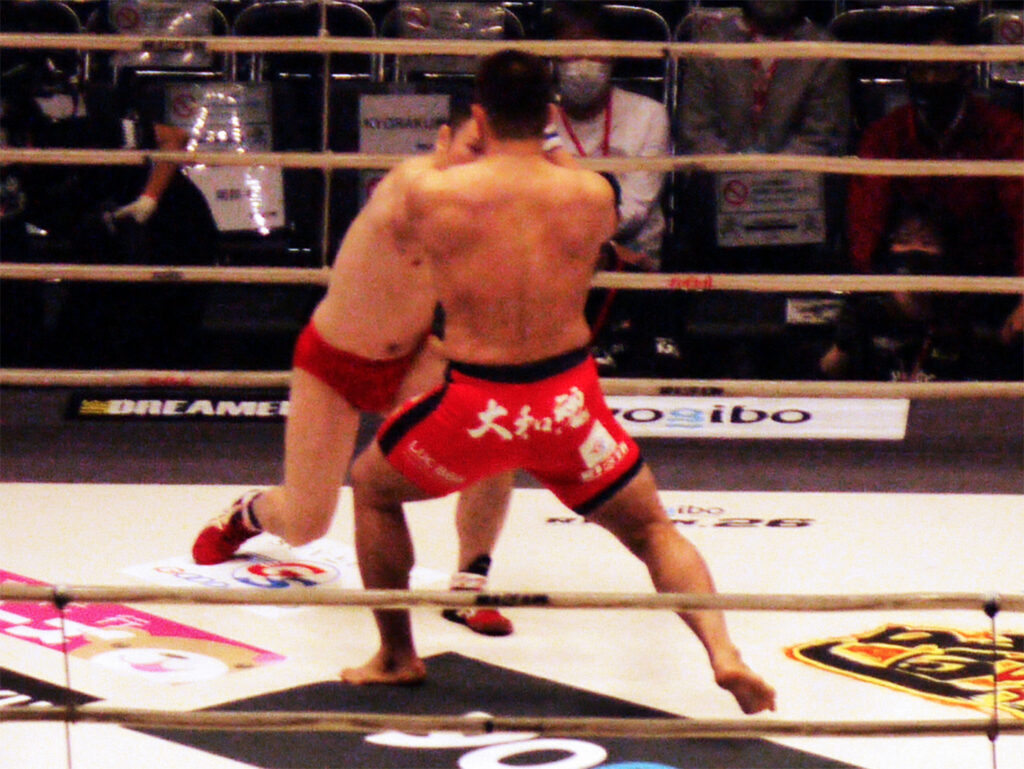 Both fighters got of to a tentative start, with “Minowaman” falling short on his overhand rights and Sudario waiting on an opening. “Takafuji Senzo” went very low with monstrous leg kicks, avoiding his experienced opponents attempt to take the fight to the ground. Fast for a Heavyweight, a few more low right calf kicks from the former Sumo Wrester and the giant killers leg buckled. Unable to put weight on the leg “Minowaman” collapsed in pain looking to the referee. Prone and unable to defend, he took a few hammerists until the referee mercifully stepped in to call the fight. Sudario is quickly earning a reputation as Japans best Heavyweight prospect, expect a step up in competition for the Purebred gym fighter.

Eduard Folayang Gearing Up For Dream Match With Eddie Alvarez

Bellator Japan – Kanna Asakura Looks Back on 2019 in RIZIN