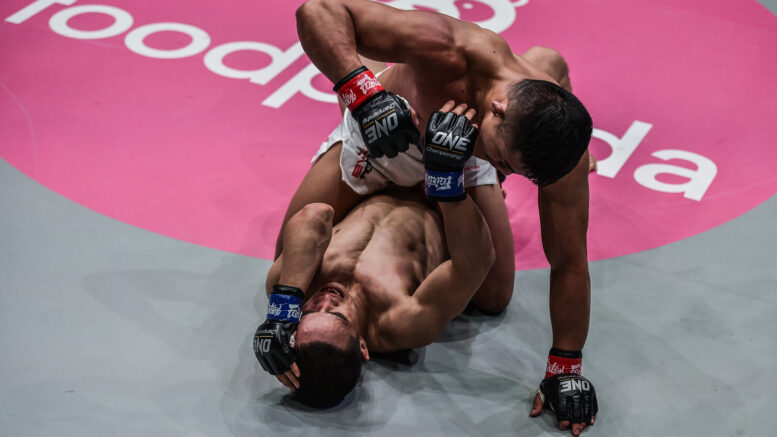 Mainam finished Liu within the distance, scoring a rear-naked choke submission at the 2:27 minute mark of round two in a mixed martial arts contest at ONE: REIGN OF DYNASTIES, an audience-free, behind closed doors event broadcast live from Singapore.

Following the spectacular performance, Mainam was overcome by emotion, as a hard-earned victory was just what he needed to help those closest to him.

“I want to thank my parents, my family, who have been going through the toughest of times. Now it’s time for me to take care of them, get the best medical care for my father. I thank all my teammates and mentors who helped me get to Evolve MMA. And that one person who never gave up on me,” said Mainam.

“I thank my coaches, and my teammates, and everyone from my Evolve MMA family, and my ONE Championship family. Thank you, Mr. Chatri, for giving me a chance. I will keep fighting with all my whole heart, soul, and being.

“I can’t completely describe in words what I’m feeling. From before the fight, until the end of it, I went through what feels like a million emotions. I have come from a very hard life, and to be so blessed, I am truly grateful. I am heading in the correct direction,” Mainam added.

Mainam joined ONE Championship in late 2019, finishing Cambodia’s Khon Sichan impressively via Americana in the first round. Against Liu, Mainam was facing a much tougher opponent, but didn’t seem to have any difficulty to the rising level of competition.

Mainam’s performance was surely awe-inspiring, and he’s certainly a budding young talent to watch out for. Though the 24-year-old former Indian wrestling champion himself was more than happy with his showing, Mainam knows he could have done even better, and vowed to continue working hard to achieve his goals.

“Everything seemed to go well. I was trying to find my momentum with the striking, and it was fine. He was strong with hard kicks, but I managed fine. I was never hurt in this fight. I had everything under control. I anticipated all of his attacks. However, I feel I could have taken mount faster than I did,” said Mainam.

“I really thank my coach. I was enjoying trading strikes with him, but he could take all of my heavy shots. So coach gave instructions to take him down. He kept telling me from the corner that I needed to get out of guard to side to mount, and that allowed me to finish. I hit Liu with hard strikes, forcing him to give me his back, which led to the Lion Kill, the RNC. I’m really glad coach was there.”

Mainam no doubt put together another impressive performance that will boost him up the rankings of a stacked division. A few more wins under his belt could see him against top opposition soon. If his first two outings for ONE are anything to go by, the sky is truly the limit for the Indian martial arts star.

“I would like to thank everyone for the support. I will not rest until I have made my mark in the history books. My journey has started, and I will work very hard to keep it that way,” Mainam concluded.