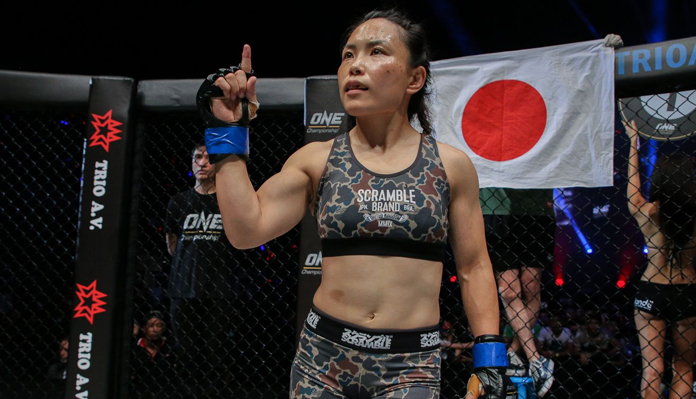 Mei “V.V” Yamaguchi knows exactly what she wants as she prepares for her upcoming bout with Russian, Kseniya “The Tigress” Lachkova on 31 March at ONE: A NEW ERA in Tokyo, Japan.

Yamaguchi knows if she wants to have any chance of earning a third World Title shot, she needs to defeat Lachkova when the pair meet inside Tokyo’s renowned Ryogoku Kokugikan, and in impressive fashion.

The ONE women’s atomweight division is full of rising stars such as Jihin Radzuan and Bozhena Antoniyar and a loss could see Yamaguchi overtaken in the race for a shot at the belt.

“I hope I can challenge for the title again soon, I know there are a lot of young athletes now in the atomweight division,” Yamaguchi said.

“I don’t know if they are super good at grappling but there are a lot of good strikers and ONE championship gives a lot of points for striking. I think these young athletes are growing so fast, they learn fast, and they already have strong physical abilities.”

“V.V” will enter the bout on the back of a unanimous decision victory over Jomary Torres at ONE: DESTINY OF CHAMPIONS. The 36-year-old controlled every aspect of the bout and demonstrated again why she continuously poses a threat to ONE Women’s Atomweight World Champion Angela Lee’s title reign.

Yamaguchi is the only woman to go the distance with Lee, a feat she has done twice. Both contests were nail-biting affairs that had the audiences on the edge of their seats. 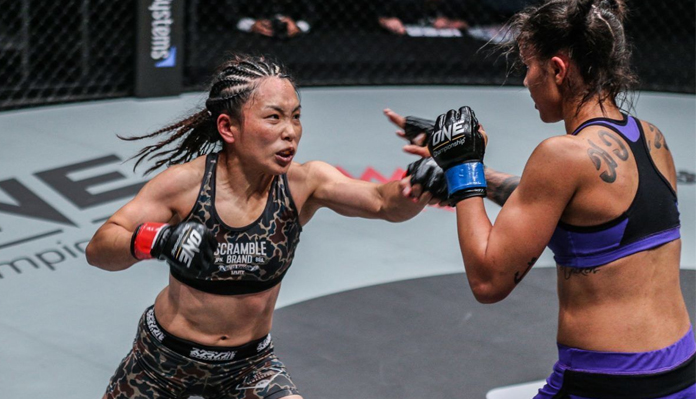 However, in both encounters, Lee was the one who had her hand raised, after getting the nod from the judges.

Yamaguchi is aware that there were areas of her game that needed refining, so she headed to Evolve MMA, Asia’s top mixed martial arts gym to upskill herself.

“I am trying to improve my striking, but if I can take down and control the ground that is good as well,” she said.

“So I am trying to work on [transitioning] from striking to take-down, and improving those kinds of scramble games. The head coach at Evolve is the perfect coach to teach me how to go from cage wrestling to take down, and all the movements I then need to finish my opponent. I was drilling these movements over and over again while I was at Evolve.” Yamaguchi added.

“I think I have gained more confidence, and I am working really hard on my stand up and boxing, so I am excited.”

Yamaguchi already has a date in mind as to when, in an ideal world, she would compete for the title.

“I want to challenge as soon as I can, but I think it would be perfect if I could challenge in October at the next Tokyo event,” said Yamaguchi.

“But there are seven months until October, so hopefully I can have another bout before then, or if ONE told me to compete for the title in another country, I would definitely take it.”

Still, at the moment her focus is solely on beating Lachkova, on what is set to be the biggest card in ONE’s history. The stacked event contains some of the biggest names in mixed martial arts, a fact not lost on Yamaguchi.

“It’s like all the stars and athletes that I grew up watching on TV [ will be competing], they were not close to me, but as stars, they were right in front of me, it’s really a dream come true,” said Yamaguchi.

“They totally inspire me as an athlete. I always want to be bigger and compete at a higher level, and if you see all these superstars in front of you, they are like your role models. I know if I don’t try hard I cannot be like that, I want to be like that, so they definitely give me power. But as an athlete, I want to perform the best in the event. I will always try and get the MVP in every event.”

Yamaguchi may not be headlining ONE: A NEW ERA, but don’t be surprised if she puts on one of the night’s most memorable performances in her home city.